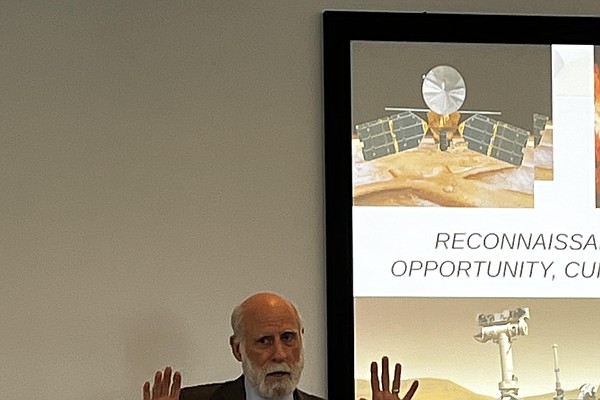 Interstellar Dreams plans to open a space center in 2023 in Reston, said Robin McDougal, founder and chairman of the nonprofit organization, The Pearl Project Institute for Innovation in S.T.E.M. Literacy. She shared the plans at the Interstellar official NASA Watch Party for the launch of #Artemis I, hosted by Google on Monday, Aug. 29. Although the NASA launch was scrubbed, McDougal assured guests at the private launch party that "there are jobs for all of our students" in space.

The Interstellar Dreams facility underscores the need for a wide range of talent positions in the space exploration industry. Its purpose will be to train aspiring and current professionals, particularly women and girls, to meet the high demand for jobs, some with degrees and some without them.

According to McDougal, "in terms of inspiring the next generation of space explorers, it is all about understanding that everybody gets to be part of the space exploration community. … It's not just all white men but young women; young people of color also get to participate in creating the space industry of the future."

McDougal said that on Sept. 10, 2022, a smaller prototype facility would open for a tour to the public. Located at George Mason University, the new space center is opening in partnership with Interstellar Dreams and is located at the College of Science and Research Hall. Register online for Space Day, Saturday, Sept. 10. https://science.gmu.edu/academics/departments-units/physics-and-astronomy-department/space-day-september-10th-2022 Tickets are free.

At approximately 8:35, on Aug. 29, NASA scrubbed the flight test launch of the Space Launch System rocket and an uncrewed Orion spacecraft around the Moon. According to NASA.gov, getting one of the four R.S.–25 engines on the bottom of the Rockets core stage to the proper temperature range for liftoff was an issue. As NASA's official launch partner, Interstellar Dreams had invited the public to watch the launch at Google's Reston office and on the big screen at Reston Stations Plaza.

During the Aug. 29 watch party, Vint Cerf discussed extending the internet for interplanetary connectivity. It would enable workers at mission control space stations and planetary habitats to communicate and would be critical to the success of future space missions.

Bolden said that more people need to get involved in space sooner rather than later so we can do more faster. “Education is necessary, but the reality is that there is a significant amount of education involved in not going to college. Trade is important, and trade just doesn't happen... So, when we need a space plumber or space electrician, they are not just going to materialize. You have to start educating them (now)."

According to McDougal, she did not grow up wanting to be an astronaut or an engineer. She did not grow up looking at the stars. She grew up living in Brooklyn, New York public housing, in an urban, light-polluted area. "I'm standing here before you with two master's degrees, and that shouldn't have happened for kids from where I came from," McDougal said.

What occurred, McDougal told the executive-level audience, is that she went to a community center after school and during the summers. She spent much time there "with people like you, volunteers and counselors." "And they taught us things. I had the opportunity for someone to say, ‘You know, you're kind of good at math and science. Why don't you go to college?’"

"It was not my idea to go to college," McDougal said.  "I had a different plan. I was going to be a receptionist."

McDougal said she went to college in New England, in a very rural area, and it was dark there. Someone suggested she "go hang out behind the auditorium, lie in the grass, and look at the stars."

"I looked at them and said, ‘No way I am going behind a building, in the dark.’"

McDougal went there anyway, and it changed her life.

"It was something I could never see, the Milky Way. I didn't even know there were that many stars... I felt smaller. The sky was so big it was actually frightening, and I was uncomfortable," she said.

McDougal said she has been on a quest to share with people to be part of the new commercial space economy. "It doesn't matter if the students are involved in the arts, music, or dancing. It doesn't matter. We need you. That's the message of Interstellar Dreams."

"We need people to think beyond and outside the box. There is no box. And so, it's called "interstellar dreams" because whether we go to another galaxy or not, it doesn't matter what issues you have in your community. You can fix them if you're able to travel and get off the planet, McDougal said.

NASA scrubbed the second launch attempt of Artemis 1. As of Saturday, September 3, 6:26 p.m,   the NASA blog  reported, "After standing down on today's Artemis I launch attempt when engineers could not overcome a hydrogen leak in a quick disconnect, an interface between the liquid hydrogen fuel feed line and the Space Launch System (S.L.S.) rocket, mission managers met and decided they will forego additional launch attempts in early September… Because of the complex orbital mechanics involved in launching to the Moon, NASA would have had to launch Artemis I by Tuesday, Sept. 6, as part of the current launch period. View a list of launch windows https://www.nasa.gov/feature/artemis-i-mission-availability