Job training to thrive at a living wage. 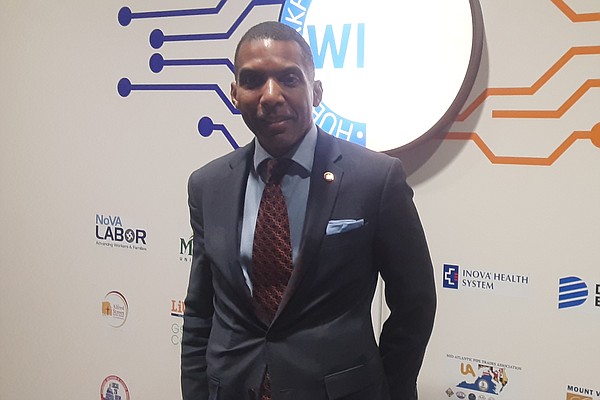 On Saturday, Oct. 8, Rodney L. Lusk (D), the supervisor for the Franconia District on the Fairfax County Board, spoke to about 50 people in a large room at the new Hybla Valley Community Center in Mount Vernon, Va. area, along with Larysa Kautz, president of Melwood; Brad Halsey, chief executive officer and co-founder of Building Momentum; and community leaders. They were there at the Grand Opening of the Workforce Innovation and Skills Hub, or W..I.S.H. Center. Lusk has 33 years of experience in county government.

"Today, and I really want to emphasize this," Lusk said. "Today is the best day I've had in those thirty years."

Lusk informed those in attendance that the Workforce Innovation and Skills Hub within the neighborhood's multi-service center was designed to meet the community's needs. It was a space created exclusively for them and would alter their lives. However, today's grand opening was just the beginning. Everyone in the room was responsible for ensuring that the space fulfilled the community's expectations.

Many of those who visited the W.I.S.H. Center are underemployed residents living along the Route 1 Corridor who work multiple retail and service sector jobs to make ends meet. The Corridor hasn't kept up with the area's fast growth, and few industries that create well-paying jobs are expanding there.

As stated in a February 2020 board matter introduced by Lusk, the W.I.S.H. Center is a catalyst, bringing in the first outside investment required to break the cycle of slow business growth and limited employment opportunities for Route 1 residents. The center is a space built specifically for the underemployed along the Corridor, a space, Lusk said, that would "transform the lives of folks in this community."

Melwood partnered with Building Momentum, Lusk and the county to make the center a reality. The initiative is a first-of-its-kind, world-class center for technological and workforce development excellence. Melwood put information about how to sign up for training at the W.I.S.H. Center on its Facebook page on Oct. 8.

The first offering is training for professional development. This course meets for six weeks, two hours per day, four days per week. The program enhances interviewing, resume writing, and workplace advocacy skills, among other skills. The MC3 Pre-Apprenticeship Construction Training is coming soon. It is an approved 120-hour training program that leads to paid apprenticeships with local unions and businesses.

That is the minimum hourly pay, and as skills and experience grow, so would the hourly wage, according to Lusk.

The Mid-Atlantic Pipe Trades Association was among the exhibitors at the event. The association encompasses Virginia, Maryland, and the District of Columbia. Yonis Bonilla is an association organizer for the union that represents plumbers, steamfitters, sprinkler fitters, pipe welders, and HVAC service technicians, all journeymen in the industry seeking to join a local union. According to the provided brochure, there is power in union numbers, leading to fair wages for workers. Association apprentices learn through paid classroom and on-the-job training for five years. At some point, the apprentices can choose the path to follow, to be trained as a journeyman, that would be making, the brochure states $47.98 an hour plus benefits.

A community member and leader who formerly resided in Maryland spoke of coming to Fairfax County in search of a better life and more opportunities, fulfilling a long-held desire. Soon she realized she had relocated to an area frequently overlooked for resources and opportunities and was merely surviving. "As I began understanding and working in the community, I went from surviving to thriving because I've connected to community members and a lot of the partners in this community," she said. She urged others to enroll in the training at the W.I.S.H. Center, whether to advance their careers or to learn how to repair household items because they could not afford skilled laborers.

JC attended the grand opening. He initially started with Building Momentum in Alexandria. It is a problem-solving company that offers various services, such as training and an education curriculum that covers soldering, welding, electronics, 3D printing, and other skills.

JC received a phone call informing him there was a job the following day. JC said he had no idea what it was but would be paid $20 per hour. "I ended up making soil probes for wineries around the world. I'm wiring, soldering, and epoxying. I never did that; I learned that there," JC said. Later, they presented him with another employment opportunity at the W.I.S.H. Center and a formal offer letter. JC said he would tell others, "This is for real. It is legitimate. They are not going to lead you on into a dream."

Alongside JC stood one of his daughters, Jazelani, seven years old. "I have five daughters and two sons," JC said. As he paused to consider the question of the ultimate difference the W.I.S.H. Center made in his life and could make in the lives of others in the community, he glanced at Jazelani.

"This is somewhere you can seek progress and go somewhere in your life," JC said. "And you can plan for not working for the rest of your life."