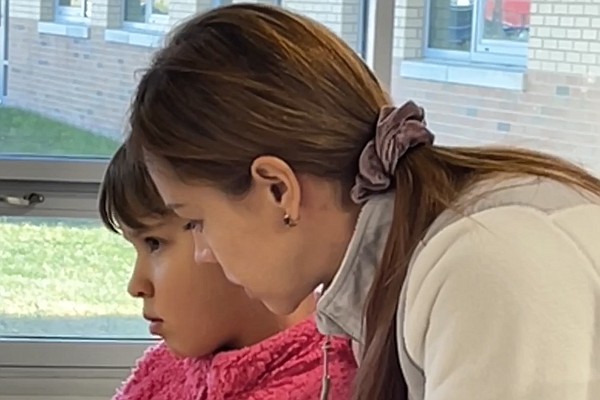 A driver crashing into a pedestrian or cyclist can be one of the most traumatic collisions anyone experiences. In Fairfax County, especially in its urban areas, there is increased tension between vulnerable road users and vehicle traffic. So far this year, there have been 21 pedestrian fatality collisions in Fairfax County, including three Fairfax County Public School students on their way to and from school, according to Mike Doyle, founder of Northern Virginia Families for Safe Streets.

On Sunday, Nov. 20, grieving residents impacted and concerned, plus Fairfax County Public Schools Superintendent Dr. Michelle Reid, Police Chief Kevin Davis, Supervisor Dalia Palchik (D) and others attended a discussion with members of the Fairfax chapter of Northern Virginia Families for Safe Streets at Oakton High School in Vienna. Doyle founded Northern Virginia Families for Safe Streets in 2017 after being struck by the driver of a car while he was walking in a crosswalk in Old Town Alexandria. Doyle and the others were at Oakton High School to recognize International World Day of Remembrance for Road Traffic Victims 2022. 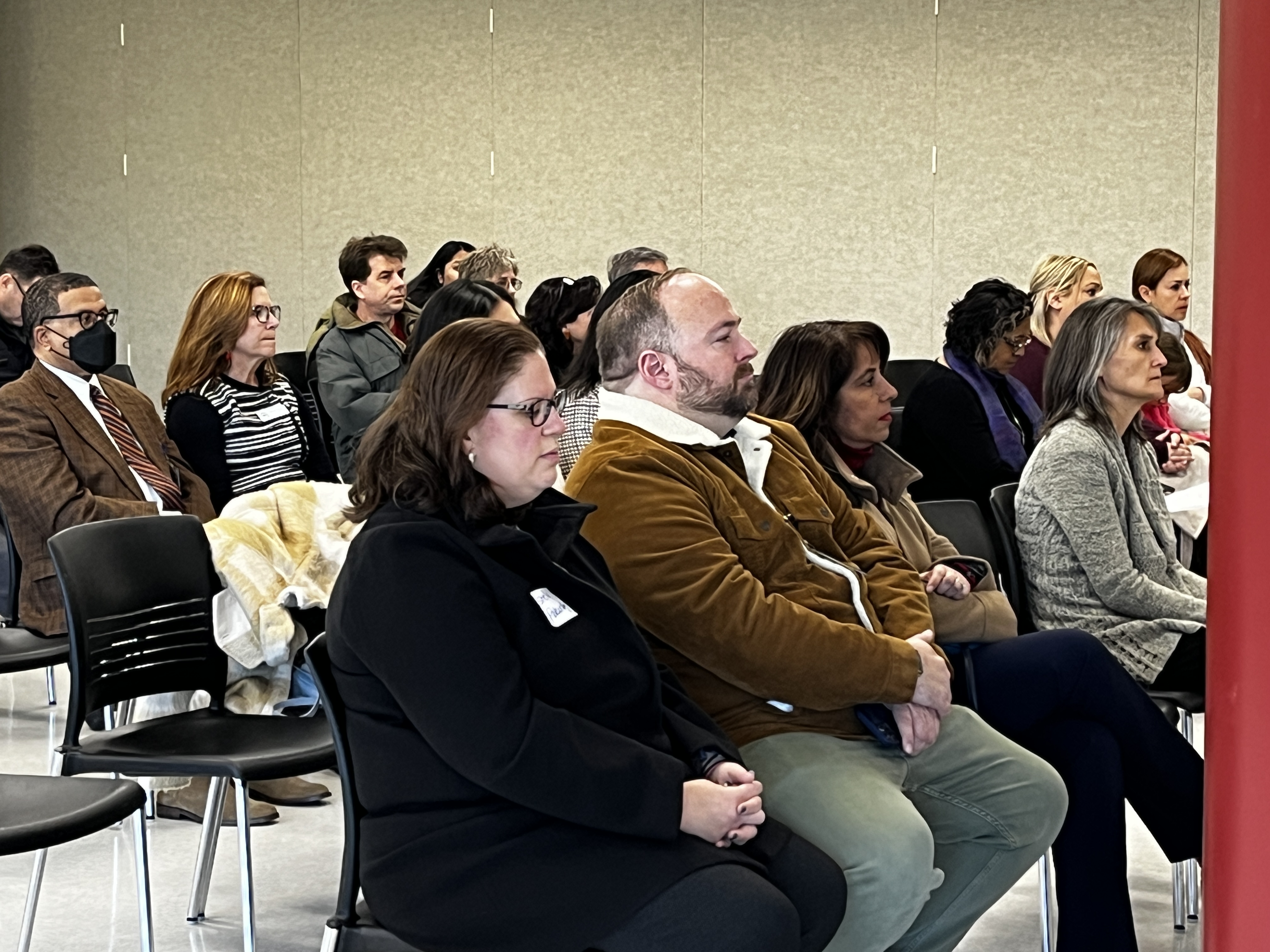 Representatives of the Fairfax County School Board at a day of remembrance for vulnerable pedestrians organized by Northern Virginia Families for Safe Streets. https://novasafestreets.org/

"Our mission is pretty simple: to advocate for safety on the streets for pedestrians and vulnerable road users," Doyle said. He told of the organization's real-time crowdsourcing for its Near Miss/Dangerous Intersections Survey. It helps identify locations where pedestrians and cyclists have experienced near-miss incidents and other dangers, with data viewable on its website. The statistics are used to advocate for policies and improvements that make streets safer. The data is used to make cases for things like speed cameras. "We go down to Richmond ... It's a constant effort," Doyle said.

During the day of remembrance, at least six speakers began to cry or choked up. There were minor solutions told, but the air was like attending a funeral. There was no peace to be found- just heaviness and sorrow and the inevitable next pedestrian crash fatality.

Twenty-one chairs shrouded in white covers formed a semi-circle between Doyle and the audience. "We are going to light a candle in front of each one of these chairs to emphasize that this isn't just statistics; it's people," Doyle said. Slowly the 21 names were read. A young girl stood in line with the elected officials holding candles. She, too, had a candle and waited her turn. Hearing the name Helen Bahta Oukubazghi, the girl walked forward and gently placed her candle in front of the vacant chair. Oukubazghi died when she was crossing Lorton Station Boulevard and a driver struck her, according to the police report.

The county's most recent pedestrian fatality happened on Nov. 16. A 17-year-old Justice High School student was killed when a driver hit her as she made her way to school, according to Fairfax County police. Reports state that the student was walking east on Columbia Pike when she was hit in the crosswalk.

On Jun. 7, two Oakton High School students died, and a classmate was seriously injured when they were hit by a speeding vehicle while walking on a sidewalk near campus between Blake Lane and Five Oaks Road after classes.

"Each of these deaths is preventable," Reid said.

School Board member Karl Frisch (Providence) described how all school bus stops are now moved off Blake Lane. The board would continue to partner with the community, whether on the location and routes of bus stops, new traffic signals, traffic lights, or speed zones. School Board Representative Elaine Tholen (Dranesville) said that the school district is in the process of hiring a new Safe Routes to School person. "We previously had a part-time position that will now be a full-time position," Tholen said.

In 2022, the NOVA Families for Safe Streets dashboard reported 1,828 near-miss incidents. According to Chief Davis, more needs to be done. He added, "I've been a big advocate and remain a big advocate of automated traffic enforcement, and I know that's coming to Fairfax County. That changes driving behaviors." Davis described Fairfax County as a suburban jurisdiction with pockets of urban areas continuing to grow. It requires their best efforts to prevent pedestrian and cyclist fatalities.

Wright says that the county sometimes doesn't do a good job of giving people temporary access while construction is underway. Developers use sidewalks as staging areas, making it harder for pedestrians and bicyclists to get around.

For instance, people are walking and riding against traffic adjacent to the J.W. Marriott Hotel construction site near the Wiehle-Reston Metro station in Reston because construction fences block sidewalk access. The hassle and extra time discourages people from walking down to another crosswalk and back again to get to and from the station. “I think someone will get hit, but nothing has been done about it," Wright said.

Another priority for Wright is completing the path on the north side at the newly opened Reston Station on Sunrise Valley Drive and providing a means for passengers to cross at the Dulles exit. "That's one big one," Wright said.

The Herndon Parkway Cycle Track connects the Washington and Old Dominion Trail, the Herndon Metrorail Station, and the Herndon Transit-Oriented Core. "It is kind of a mess," Wright said. "There are plans for the cycle track, but it's going to be a long time before it is completed."

According to William Ashton, town manager of the Town of Herndon, three projects near the Herndon Metro Station are in varying stages of completion. The first one, a bicycle path, goes to Worldgate. "That could be in the next couple of months," he said.

Two independent Van Buren Street constructions are underway one block from the Herndon Metro Station. "We have the intersection of Van Buren with Herndon Parkway and then what we call the Complete Streets Project, which is Van Buren from the intersection back to Spring Street. The road has been milled, but to install pavement, daytime temperatures must be in the mid-to-upper-40s. The road will be striped a few weeks after it is completed," Ashton said.

Then there will be dedicated bike lanes. The sidewalks are finished except for the Van Buren and Herndon Parkway junction, one block from Herndon Station. “My goal was to have it completed when the station opened, but we couldn't get it done," Ashton said.

NOVA Families for Safe Streets said the purpose of the Day of Remembrance was to “call attention to the issue of traffic fatalities and serious injuries on pedestrians and other vulnerable road users; elevate the voices of those who have been most impacted by traffic crashes; advocate for traffic regulations that will promote safer streets on our roads, and promote the Vision Zero goal of zero traffic fatalities and serious injuries in all three Northern Virginia jurisdictions of Alexandria, Arlington, and Fairfax.”