Some say it is unsightly. 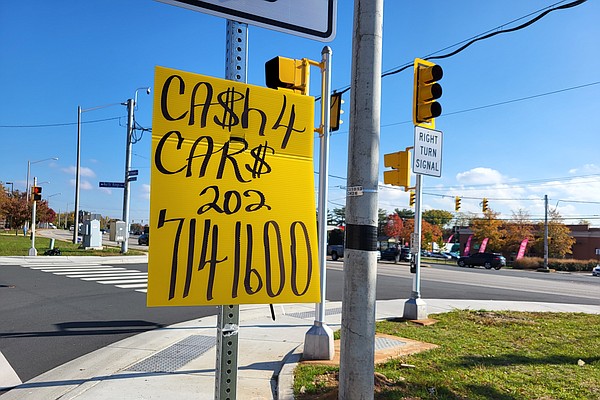 With all that’s going on along Richmond Highway these days, there are parked cars and temporary signs with slogans such as “cash4cars,” fastened to whatever is available. The proliferation of signs doesn’t improve this up-and-coming area in southern Fairfax County.

Daniel Selnick is a longtime resident that was so fed up with all the signs, he wrote to elected officials, Fairfax County and the Virginia Department of Transportation. His complaint: the signs and the trucks parked on this road, which runs parallel to Richmond Highway in front of the shopping area.

“It looks so horrible,” Selnick said, “with so much positive growth happening, seeing this is not good.”

Another longtime resident John Crofoot was catching a bus in front of Beacon Shopping Center where the trucks were parked on a county street.

“They put a lot of signs here, it’s been going on for a long time,” he said. The only visible popsicle stick sign that could be seen was about apartment rental.

Selnick spoke with VDOT and it may have had an impact. On a drive from Jefferson Manor to Jeff Todd Way, there weren’t many signs except one at the North Kings Highway interchange, addressing vehicles traveling north on Kings Highway.

“It’s not only an eyesore, it’s a driving hazard,” Selnick said.

The county did respond to Selnick’s concerns. Aaron Campbell, the Constituent Service and Transportation Aide in Supervisor Rodney L. Lusk's (D-Franconia) office noted the road designation is not as clear cut as it appears. Many public roads allow some commercial vehicle parking and almost all have commercial trucks that use them. “They are more impactful to the road but are necessary for the function of our economy,” Campbell noted.

Any public road that adjourns an industrially or commercially zoned area is viable for commercial parking as long as there is not a specific restriction. Campbell admitted that the road is not wide enough for parking and travel, but without yellow lines indicating the travel lane, or no parking signs, police say they cannot ticket.