Tree-Planting Memorial for Robin Rentsch- Environmental activist would have smiled 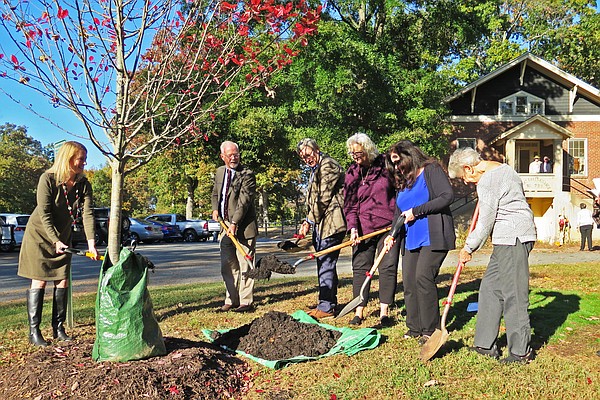 As a person fascinated by the world and all it had to offer, Robin Ould Sabin Rentsch was always eager to learn more. This Renaissance woman was not only a master scuba diver and master gardener, but could also make an éclair from scratch, debate Middle Eastern politics, dance the Charleston, and take a chainsaw to invasive vines. On Saturday, Oct. 22, a memorial service for Rentsch was held at the Great Falls Grange, followed by a ceremonial tree planting. She died on May 30, 2022, at age 83.

Rentsch was an environmentalist, according to her daughter, Catherine Brooke Sabin. "My mom was a tree-hugger, figuratively and literally," said Sabin. "She would be so pleased that the GFCA planted two native trees in her honor, which will provide beauty and support wildlife for decades to come."

In the late 1970s, Rentsch worked to create trails and advance other environmental causes locally. After lobbying the state legislature for permission to create Virginia's first countywide trails plan in 1979, she drew up the Dranesville District trails plan. Among her many community service activities, Rentsch was a founding member of the county's environmental citizens advisory group called Conserve Fairfax. She also served on about eight boards and committees that worked on trails.

When it came to various environmental issues, Rentsch served as a mentor, according to William (Bill) Canis, president of the Great Falls Citizens Association. He attended the memorial along with Supervisor John W. Foust (D), Jackie Taylor, Stella Koch, and Eleanor Anderson.

"Robin Rentsch was a civic leader in Great Falls and in Fairfax County, raising public awareness about the effects of the use of excessive fertilizers on streams, ponds, and downstream the Chesapeake Bay," Canis said.

According to Canis, "As co-chair of the GFCA environment committee, [Rentsch] organized residents to join her in weeding out invasive plants in local parks and preserving heritage trees throughout the community. She was also a tireless advocate for residents designating their yards as certified wildlife habitats through the National Wildlife Federation." Her leadership led to the certification of over 200 properties in Great Falls.

As examples of some of Rentsch's numerous contributions to Great Falls, a 2008 article in the Connection Newspapers cites her leadership of the annual stream cleanup, preservation of 47 historic oak trees at the Grange, and contributions to the Great Falls Library garden.