Increased lighting and police patrols are on the suggestion list. 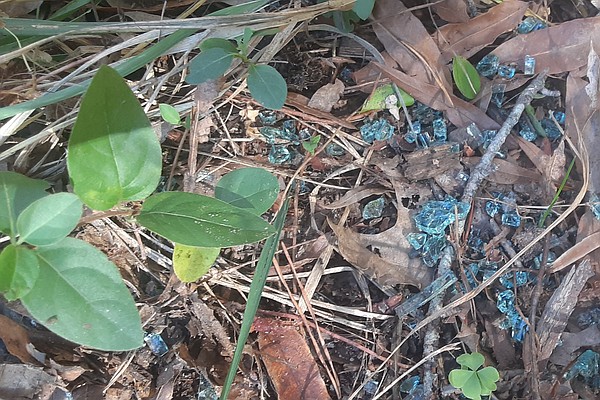 Boulevard was a sign that a car had been burglarized, alarming park hikers who frequently walk in this wetlands park in Mount Vernon. There are signs at both parking lots to lock the doors, which may create awareness, but for Sam Reeves who lives down the street, it’s something he does without thinking when he visits the park as much as four times a week. “I lock my car all the time,” Reeves said, noting that “the Sheriff was here this morning.”

There are two entrances to the park, and Reeves parks on the South Kings Highway side and the car glass was over on the Lockheed Boulevard. The lot on the Lockheed side is a little more isolated, and in the corner, glass from a broken car window littered the corner parking space.

Another park visitor had her car broken into twice, and in the end it cost her about $1000. "My car lock was punched in and door handle was broken at Huntley Meadows on Oct. 7," she said in an email. "After I got it repaired, I went back to Huntley Meadows twice and shortly after the second visit discovered that the lock was tampered with and broken."

Gary Robinette's car was broken into, which he reported to Supervisor's Rodney Lusk's (D-Franconia) office as well as the Fairfax County Park Authority and the Board of Supervisors. He would like to see more lighting and questioned the enforcement of the park closing at dark. Robinette has seen work going on at other parks so he questioned the funding excuse.

“To add to the frustration, I saw a maintenance crew fixing the spotlights for the Green Spring Park entrance sign, so obviously that is more important that fixing parking lot lighting at Huntley Meadows,” he said.

Dave Nickle used to work at the park, sometimes cleaning up the remnants of late-night beer parties, and noted there were two incidents then too. As far as a police patrol, “not very often,” he said.

Supervisor Lusk is aware of the situation at Huntley Meadows. "My office is in constant contact with the Fairfax County Police department regarding crime trends in our district. I am aware of recent incidents involving vehicle break-ins in our community and today introduced a Board matter that will improve our street light infrastructure across the county. My Board Matter is just one step my office is taking to discourage vehicle break-ins. My office and the Fairfax County Police Department encourage residents to remove their valuables and lock their car doors when leaving their vehicles unattended."

In late October, the Fairfax County Police Department reported four auto thefts around the corner from Huntley Meadows Park but these thefts were in the residential area. They didn't report any complaints about the park directly. The Fairfax County Park Authority is working with the police and "we will be meeting with them to discuss their investigation and potential safety alternatives in the near term," said FCPA spokesperson Judy Pederson.

The Friends of Huntley Meadows are putting out the word concerning the parked cars getting broken into. On their website, they have some tips:

When you visit Huntley Meadows:

* Please plan to carry your valuables with you or leave them at home.

* Car break ins are occurring. To help discourage this activity, please do not leave anything people would want to take.

* The Fairfax County Police are doing extra patrols, but with everyone’s help of leaving nothing of value to steal, this will make the parking lot unattractive to this activity.

FCPD officer Zirker arrived at the Lockheed Boulevard lot to use the portable restroom and said the lot was a regular stop on his route.