Alexandria detention facility may be consolidated as part of statewide effort. 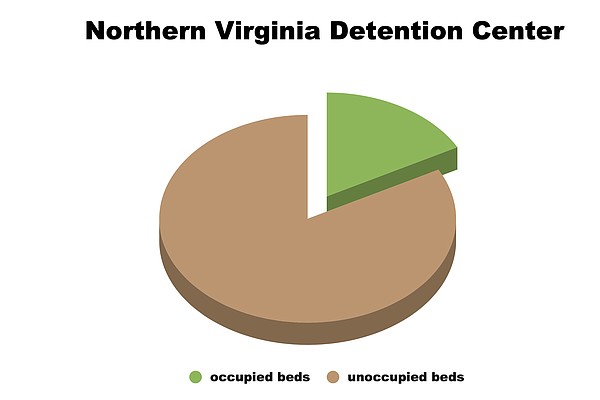 When Alexandria's juvenile detention center opened on South Whiting Street in 1956, the facility had 30 beds and served as home for wayward teens waiting trial in Alexandria, Arlington, Fairfax and Falls Church. By the 1990s, Virginia adopted a get-tough on crime approach and more space was needed to warehouse all the kids waiting for their court dates. So the Alexandria facility expanded to 70 beds, and Fairfax County built its own detention center with 121 beds.

Now the pendulum is swinging in the other direction.

Courts are more likely to allow minors to stay at home until they day in court, and juvenile detention centers across Virginia are way below capacity. Here in Alexandria, the Northern Virginia Juvenile Detention Center has 70 beds with an average population of 12 juveniles. That's prompting fresh concern that the center might close and move Alexandria juveniles to the Fairfax facility as part of a statewide reassessment of the juvenile justice system. Whatever happens with the Alexandria facility, Virginia's system for juvenile justice is obviously bloated and deeply in need of reorganization.

"This is good news," said state Sen. Dave Marsden (D-37), a former director of the Department of Juvenile Justice who is leading the reorganization effort. "The fact that we have this few kids locked up in our corrections and detention systems has created this problem, and it is a problem and it is difficult. You're talking about people's jobs and about beloved local programming, and it's difficult to do this. But it is our obligation to spend public dollars in a more efficient and effective way."

This fall, the Commission on Youth is expected to make recommendations to the General Assembly about consolidating space and making more efficient use of resources. That could mean as many as nine consolidations, reducing the number of juvenile detention facilities in Virginia from 24 to 15. Some juvenile detention centers in Virginia have a handful of kids with a fully staffed facility, including a principal, teachers, custodial workers and a kitchen staff. Now that the number of juveniles being detained has declined dramatically, all that overhead is cause for alarm. But the idea that facilities across Virginia might close is also cause for alarm.

"Is sending our kids to another jurisdiction for others to care for the right thing? Is that the best for our families?" asks Johnitha McNair, executive director of the Northern Virginia Juvenile Detention. "Nobody is saying we need to lock up more kids so that we are using this facility more efficiently. But we want to be able to serve our children here at the right size."

THE EXCESS CAPACITY at juvenile detention centers across Virginia is creating an opportunity for local governments to locate mental health services, substance abuse counseling and mentoring programs. Some argue co-locating those services at existing detention centers would be a more effective way of handling the situation rather than sending children far away from their families and their support networks. Since the decline of the get-tough-on-crime model of justice in the 1990s, a new way of thinking has emerged stressing the importance of keeping juveniles physically close to their homes.

"The average stay at these facilities is only about 21 days, so you want these close to their homes so they can continue to receive services in a seamless fashion," said Sen. Barbara Favola (D-31), who is chairwoman of the Senate committee that would consider the reorganization effort. "If the youth is not physically close to the family, it's hard to have a comprehensive approach. And also many youths are receiving counseling because of ongoing trauma in their lives, so being able to receive ongoing services is really important."

The reason for the dramatic decline in the number of juveniles being detained at these facilities is a matter of debate, and the reason for the decline might end up influencing the kind of recommendation the commission is likely to make. Some say judges have shifted their approach from a get-tough-on-crime model to one that's more focused on the needs of helping children escape the criminal justice system. Others say the reduction is a result of back-to-back Democratic administrations that took an approach unlikely to be replicated by the current Republican governor.

"It's been suggested by some folks that the numbers might be lower than where they likely would be had there not been the McAuliffe and Northam administration," said Sen. David Suetterlein (R-19). "These numbers have been down for some time, but we need to be able to evaluate if that trend is likely to continue or do we expect that will go in the other direction?"

Another potential wild card is the pandemic, which created delays in the court system that may have artificially altered the student-to-teacher ratio at the detention centers.

"The court dockets are obviously behind with scheduling and seeing kids," said Del. Emily Brewer (R-64), who is chairwoman of the Commission on Youth. "That might also have something to do with the children that are also ending up in these facilities. So we may not be seeing the accurate student-to-teacher ratio at this present time."

THE DANGER FACING the commission and lawmakers is taking action that could end up causing more harm. For example, state leaders want to avoid what happened in Pennsylvania, where state leaders dramatically downsized their capacity for detaining juveniles and is now shipping them to other states, including Virginia. Similarly, they don't want to continue financing juvenile detention centers like the one in Charlottesville, which has a facility with an average of five juveniles a day that has an annual budget of $4 million. That's a cost of $800,000 a year for each occupied bed.

"We don't want to spend a lot of money to change this facility when ultimately it might be decided to close it," said McNair. "We have to walk a fine line with this because we want to get it right."