Intelligence-led policing directs law enforcement resources to where they do the most good. 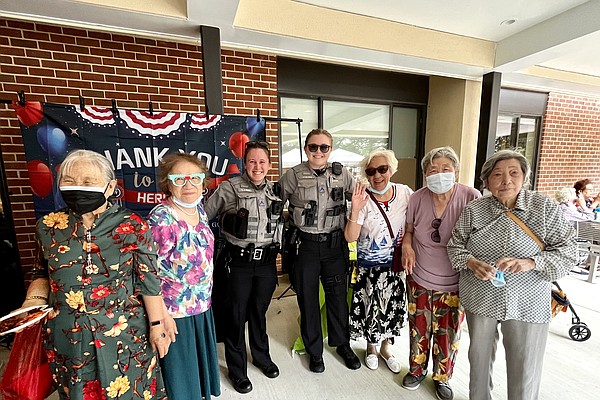 "We have fifteen events to cover [this evening], and this is my first one," Pagerie said. "It's nice to see the showing here. There are a lot of smiling faces."

According to Pagerie, it was crucial for Reston District Station staff to show their support for the community and come out that evening. One reason was that policing is a hard job and is becoming more challenging. "We can't do the job without the support of the community, and that's what this is all about tonight. I want to thank you on behalf of the Fairfax County Police Department and on behalf of the men and women of the Reston District Station. Thank you for your support," Pagerie.

Nearby, Fairfax County Auxiliary Police Officer D. Staten mingled with residents, facilitating and encouraging conversation. He listened attentively to the concerns of a Hunters Woods resident. Afterward, Staten said he was there to be the face of the police community at a fun event instead of one involving a crisis or difficult issues. "That way, we can build the bridges," Staten said.

According to a news update from Fellowship Square, Hunters Woods residents had been upset by a June murder on a Reston trail less than half a mile from their apartment building. The release added that older adults are particularly vulnerable to certain crimes because they are commonly socially isolated, tend to live in urban areas, depend on public transportation, and follow predictable behavioral patterns. "While research shows that people aged 65+ experience the same crimes as the rest of the population, fear of crime is higher in older adults than in younger populations and can lead to social isolation."

Captain Pagerie wrote in an email that National Night Out was a wonderful opportunity for the Fairfax County Police Department to strengthen its relationships with the community. "Although National Night Out occurs once a year, maintaining community trust and building lasting bonds with our residents is an ongoing process. The FCPD is experiencing a staffing crisis, and it has never been more important for our residents to be vigilant, acting as the eyes and ears for the police department," he said.

Pagerie asked that if someone sees something suspicious or a crime in progress, they call the police without delay. “This summer, our officers have been focusing on the crime hotspots identified in the Reston District. Through intelligence-led policing, I can deploy patrol officers and other resources based on identified needs throughout the district. With diminishing staffing levels, this is an academic approach to best combat the crime fight," Pagerie said.

According to Pagerie, Reston's more serious crimes, Group A Crimes, have increased by 20 percent year to date, and reported assaults have increased by nearly 38 percent. He added that on June 9, Reston District Station held a Town Hall Meeting to address community concerns related to the recent murder on the pathways near Grey Wing Square.

"The FCPD is changing our shift configuration to best staff our patrol squads, and this allows for the reinstatement of our Bicycle Team,” he said. “Residents will soon see our bike officers on the trails patrolling again. Additionally, residents may see our officers in a golf cart style police vehicle patrolling the pathways and interacting with the public."

"Our residents are encouraged to get involved by attending our Community Advisory Committee meetings that occur every third Wednesday at the Reston Police Station. This is a great opportunity to share community concerns and to voice your concerns to the police station commander," Pagerie said.

When asked about the Reston District Station Community Partnership, RESET. Pagerie said, "We have been focused on filling our patrol slots to meet our needs for calls for service. We are operating on a lean staffing model, and RESET will be reinvigorated when staffing permits."