Parent turns a donation into a lesson on positivity for others. 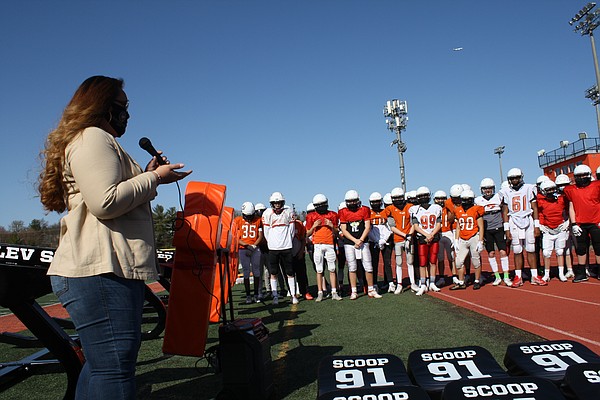 The bake sales and car washes that provide funding in the past for extra sports equipment has fallen victim to the pandemic this year so in stepped a parent at Hayfield Secondary School, and the team spent Monday afternoon, March 23, hitting brand new tackling dummies, blocking sleds and crossover cushions to make this football season work.

“Attention players, what you see here is a generous donation,” said Coach Eric Henderson to all the Hayfield Hawks players on the field. “You’ve got to understand, this makes you better,” the coach said, making the connection between practice and actual games on the football field.

Then Janelle Lei-Sam, the mother of one of the players, grabbed the mike. She’s the president and CEO of Kristen Stevens, the company that made it all happen with a donation of $21,000 worth of field equipment that the team needed. She made a lesson out of it for the team. “My point is, anytime you get a chance to make a positive step in someone’s life, you’ve got to jump in,” she said.

Lei-Sam’s son Amani, who is a linebacker on the team, got the honor of cutting the ribbon around the blocking sled before the team broke up into practice squads and put the new equipment to use. One of the old pads they used before showed all the signs of wear and tear with padding

leaking out and duct tape covering holes. The team did not have the tackling dummies and blocking sleds in previous years, so to get that practice in, they tackled each other which sometimes led to injuries that could have been avoided. Coach Henderson mentioned that he felt it was better to spend the money he’s allotted from the county on helmets and uniforms instead of tackling dummies. There isn’t enough in the budget for both.

“With all this new equipment, practices will go a lot smoother,” said assistant coach Terrell Wheeler, who played on the Hawks when he was a senior in 2016.

All the Fairfax County high school football teams are playing this spring, which is a big change from previous years, and the bleachers are not as full on game night due to the measures taken to avoid spreading COVID-19.

“In the middle of this pandemic, this is something positive,” Lei-Sam said.

The Hawks are 0-4 this season so far, but that may change now that the practices will be upgraded.